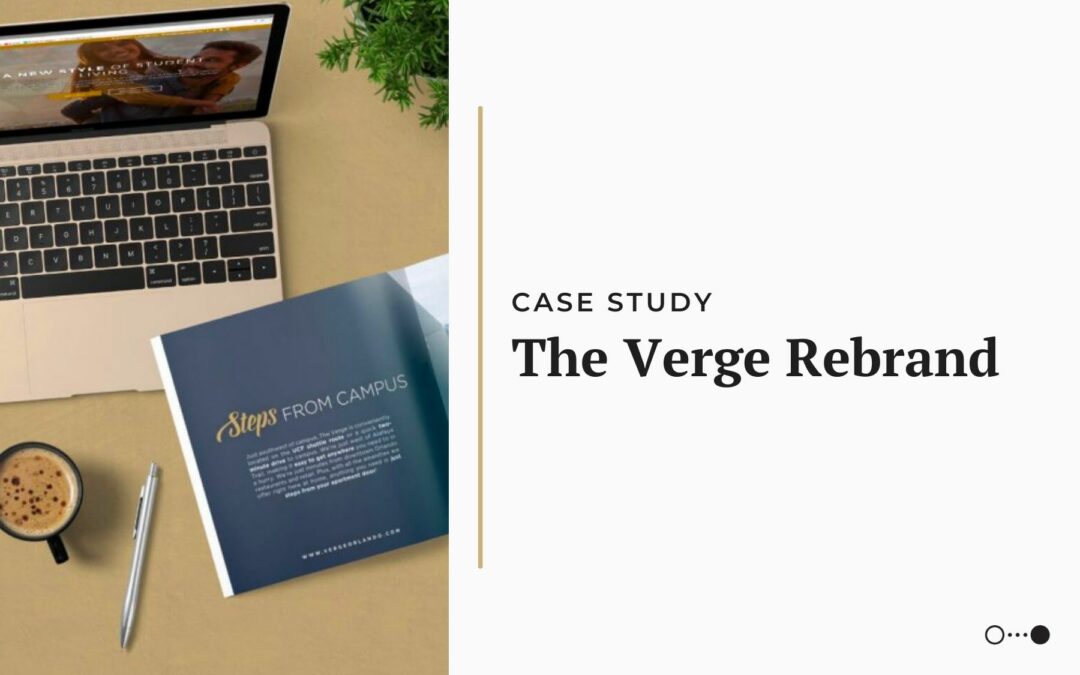 Catalyst was engaged in spring 2016 to rebrand a newly acquired off-campus housing property in the Orlando, Florida, market serving students at the University of Central Florida. The property, The Edge, was well liked by both residents and prospects in the market; however, it was part of a value-add strategy to reposition the asset as a luxury student housing community with property upgrades, reduce crime at the property, and increase rent over the prior academic year. As part of the management transition, the property required a new name and brand.

Catalyst worked directly with on-site staff, including Community Assistants, to create a new name that elevated the brand in accordance with property improvements planned for the next year, while maintaining the same connection with students. Because the property was well liked by residents and the surrounding community, the name “The Verge” was selected as a nod to its previous identity.

In addition to renaming the property, Catalyst also created a logo that incorporated the familiar gold color of the UCF market. It was sleeker and more modern, and gave the property a recognizable mark that could stand alone from the full logo. The prominent gold color was accented with a full brand guide that included complementary colors of deep teal and blue, which elevated the feel of the identity and also matched the proposed interior design renovations. Catalyst also chose several fonts, patterns, and textures — including a geometric overlay that matched the logo mark — to round out The Verge’s branding.

Catalyst strategized a brand reveal campaign — a VIP pool party that successfully revealed the new brand, created buzz in the marketplace, announced the upcoming renovations, and generated new leads. Working with the on-site staff during the planning process, the Catalyst team created ﬂyers, emails, and a landing page where students could RSVP to the event. The collateral contained teasers about “something big” that would be revealed at the event and encouraged people to attend for a chance to win a variety of door prizes. Through email marketing and ﬂyers handed out in the market, 217 RSVPs were generated, which helped build a list for upcoming marketing campaigns as leasing kicked off in the market.

Post-acquisition and post-branding deliverables, the growth of the student housing property far exceeded expectations. The Verge reached 100% occupancy for both the 2016–2017 and 2017–2018 academic years, and the overall NOI grew by 32% for 2016–2017. Renovation premiums also were fully realized with lease-ups for the 2017–2018 academic year, achieving an average rent of $702 — a 20% increase from the pre-renovation rates.