Is Micro Student Housing the Solution to High Rents? 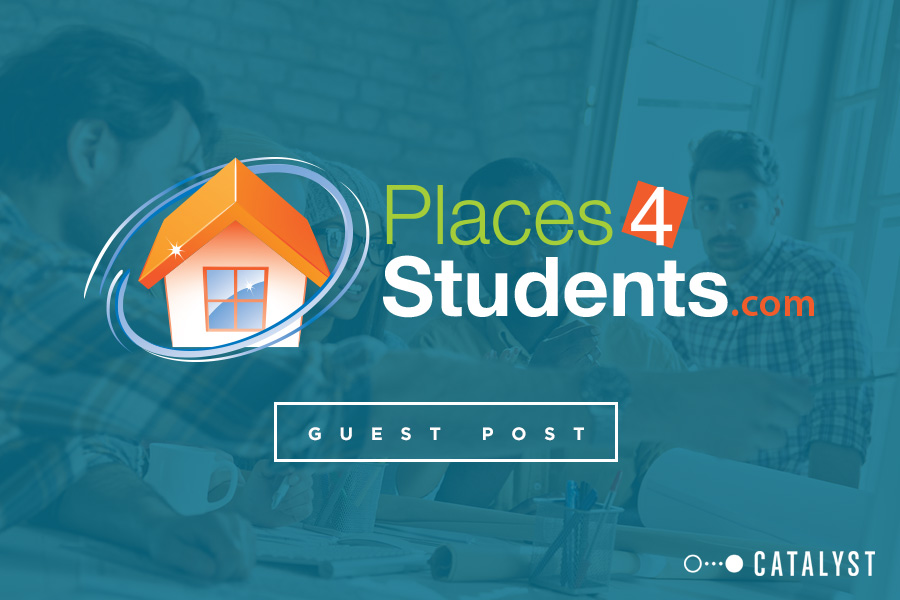 Along with the proliferation of purpose-built student housing, research has shown that the overall price of student housing has been rising. While prices have been consistently rising, the average distance from campus has been progressively shrinking.

According to Axiometrics, the average distance from campus for student housing built between 1995 and 2010 was roughly 0.7 miles, but the distance shrunk to less than 0.5 miles from campus between 2011 and 2016. This trend is particularly problematic in college and university towns where there is a shortage of available real estate nearby campus; higher property and development costs often lead to reasonably higher rental rates. 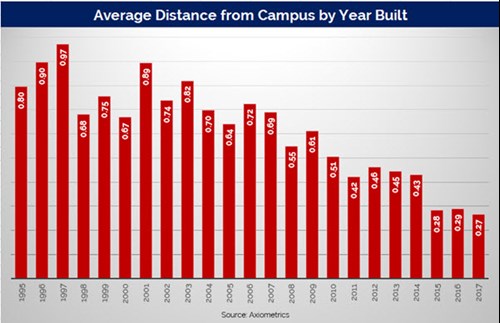 Some highly competitive rental markets have seen rental rates skyrocket, which results in a lack of affordable accommodation options for students. Back in 2013, J Turner Research surveyed over 7,000 students and found that the bulk of them paid rent in the range of $400–$600/month (42% of respondents) and that some were in the range of $600–$800/month (18%). It’s become quite common across many markets for the average student housing bed nearby campus (less than 0.5 miles away) to charge rent above the $600/month mark. 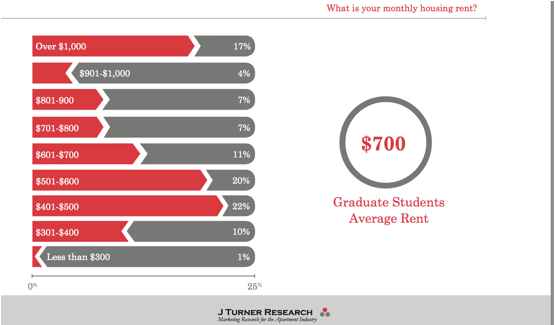 In response to rising rents, some student housing developers and schools have set their sights on an emerging trend: micro-apartments.

Micro-apartments are characterized as small but cozy spaces, typically ranging somewhere between 100 to 200 square feet. They are often priced well beneath the market rate for a studio apartment. These spaces creatively make use of all the usable space and often have unique storage compartments to maximize space. For students without many possessions or furnishings, micro-apartments seem to offer an ideal solution in rental markets commanding high rents.

Micro student housing emerged on the scene as early as 2013 with the introduction of the smart student unit by Tengbom. North America has been somewhat slower at adopting micro student housing in comparison to Europe, but advances are being made. Leading the way in Canada is the University of British Columbia, which announced early last year it would be introducing micro student housing known as the nano studio. The studios are scheduled to be available for rent in 2019 with rates ranging from $675–$695/month, which is extremely affordable for this region. The rent includes access to high-speed Internet, communal games and fitness rooms, study lounges, meeting rooms, storage lockers, and more.

This project garnered a ton of media attention, with dozens of major outlets reporting positively about the project:

The overall optimism and positive feedback generated from this project have led many to believe that other universities and developers in competitive rental markets will follow suit.

CannonDesign, a global design firm, seems to agree that micro student housing is a trend on the rise. CannonDesign highlights another project underway near Boston University that seeks to address similar concerns to those in the Vancouver market, including high rents and a lack of affordable housing options. For the most part, any rental market that is experiencing housing challenges in relation to high rents and accommodation scarcity can benefit from the availability of micro-units. This holds especially true for college and university towns where there is already a competitive rental market existing, without even factoring in student tenancy.

While there are dozens of benefits for micro student housing, there are still a few less favorable points that need to be addressed:

If the demand proves to be strong within the markets testing micro student housing, it’s a reasonable prediction that this trend will continue to grow in popularity. Larger metropolitan areas that are coupled with competitive rental markets and significant student populations will likely be the first ones to see the development of micro-units. Only time will tell how fast this trend catches on, but we can expect to see many new micro developments start in the next five to 10 years.