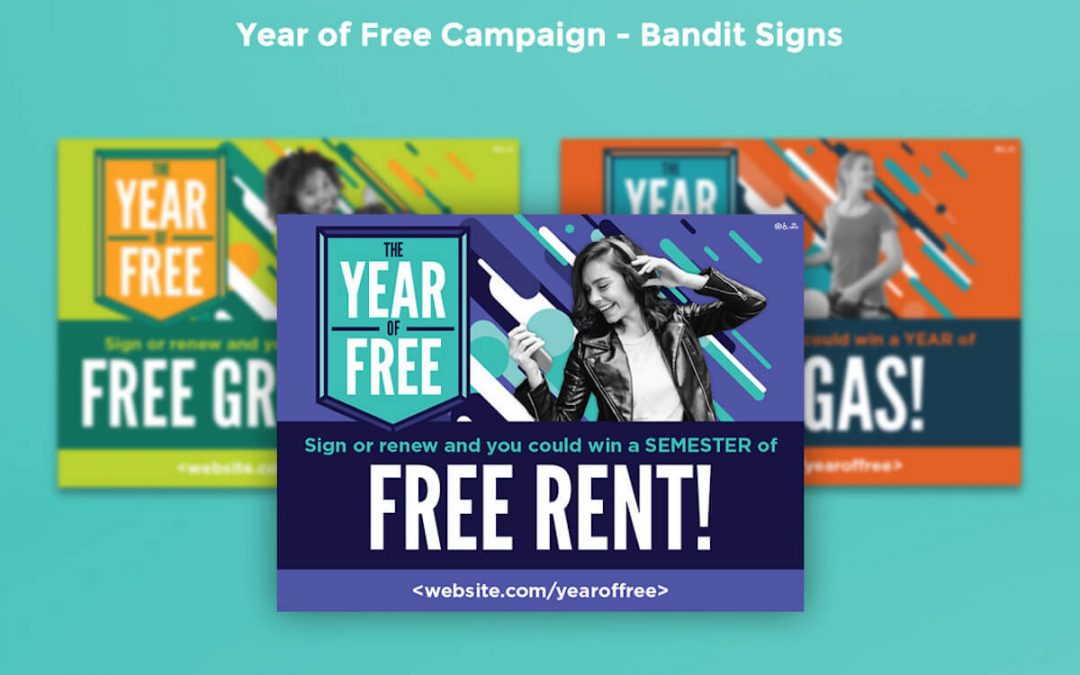 A total of 44 student housing properties within Campus Advantage’s portfolio needed an extended marketing campaign that would not only drive leasing velocity for the 2018–2019 school year, but also operate as a unique means for them to stand out from the competition in their markets. Due to many of the properties struggling to overcome the same type of offer at competitor properties, especially because students were holding out on signing leases at properties with the best offer/incentive, the campaign needed to successfully draw prospects and boost renewals.

Catalyst worked with the Campus Advantage leasing team to develop a fully integrated national campaign — called Year of Free — to drive consistent leasing portfolio-wide over a 3.5-month period for the 44 participating properties. The goal of the campaign was to entice students to sign a new lease or renew from April to July 2018 (one property ran the campaign from May to August), and the earlier they signed, the more chances they had to win in the giveaways offered as part of the incentivizing campaign:

Campaign deliverables included two emails per month based on the designated monthly giveaway, landing pages, monthly videos, flyers, door hangers, sticky notes with an IRIO number, a poster, bandit signs, a banner, T-shirts, social graphics, social media ads, and Google ads. To generate excitement, each monthly giveaway was designed with its own bold color scheme for quick reference, as well as to keep things fresh within the competitive market. The campaign also had its own Year of Free logo utilized on all deliverables, which reinforced the campaign’s continuity and credibility.

The goal of Year of Free was to exceed the number of leases signed during the same period in the 2017–2018 school year, and successfully, the integrated campaign positioned participating properties to be 750 leases ahead than the previous year’s numbers.