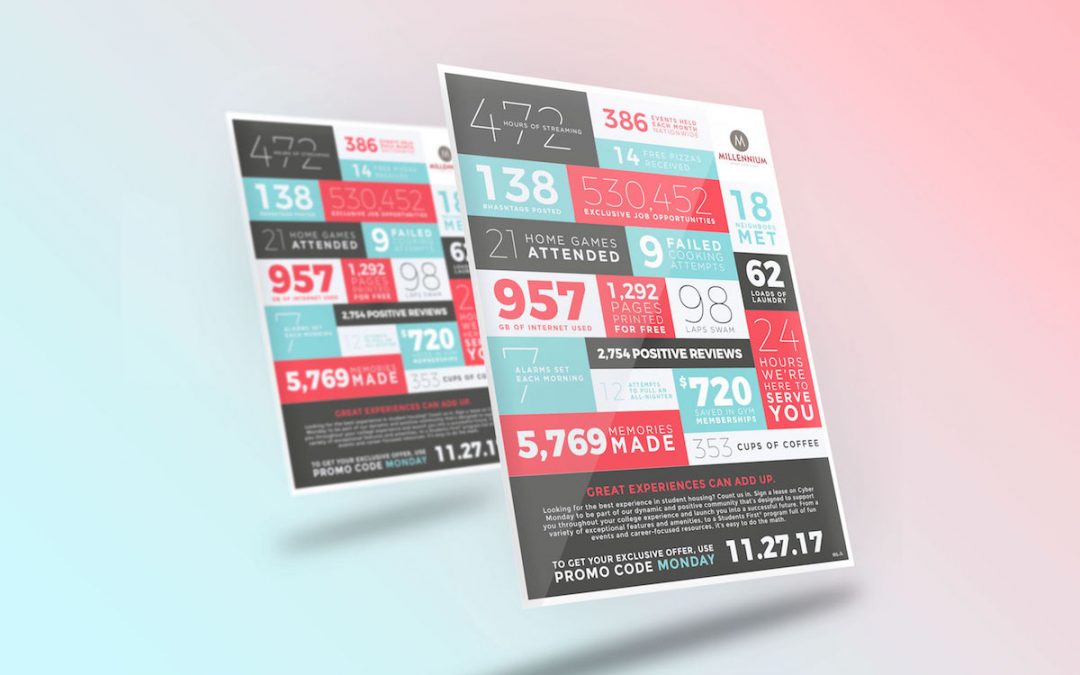 As the fall semester comes to a close, students are prepping for exams and working on final papers before their long-awaited winter break arrives. With the excitement of the holidays around the corner, historically, this time of year usually means a slowdown in new leases and renewals within the student housing sector. Properties within Campus Advantage’s portfolio needed an interactive holiday lease-up campaign that would increase numbers significantly before the year closes.

Catalyst worked with the Campus Advantage leasing team to develop a fully integrated national campaign — focused on Cyber Monday — to drive consistent leasing portfolio-wide, serving as the last big push to sign residents for the following year during the fall semester and before prospects leave for winter break. The first Monday after Thanksgiving has become the biggest shopping day of the year. In just 2017 alone, online shoppers spent nearly $7 billion.1 The goal of the campaign was to capitalize on that same momentum for student housing by offering special deals that not only served as a great attention grabber, it also added urgency to sign or renew to lock in one-day-only deals.

For 2017, Catalyst created the theme, “Cyber Monday by the Numbers,” which focused on bold numbers and humorous, memorable statistics that called out why residents should renew or why prospects should sign leases with each participating property. While this theme specifically called out unique facts and figures about CA properties, it was universal enough to be used by all properties within the portfolio. In addition to theme development, Catalyst also created a video, various social media graphics, emails and associated landing pages, thank you cards, posters, and flyers that allowed each property to tease Cyber Monday specials leading up to November 27, 2017. Each participating property established the special deal they wanted to offer residents and prospects, which ranged anywhere from discounted rates to various prizes based on their individual budgets.

The campaign was used to market student housing properties to students (18- to 24-year-olds) in more than 30 markets around the United States, and the 2017 campaign was tremendously successful. More than 176,000 emails were sent to 71,847 unique recipients with an average open rate of 32.52% and a click-through rate of 6.26%. In total, the campaign generated 2,640 signed leases across the portfolio.